You can't get a much closer SST match than the Euro Seasonal to years with lower activity. It looks like the actual SSTs of below average seasons since 1995: 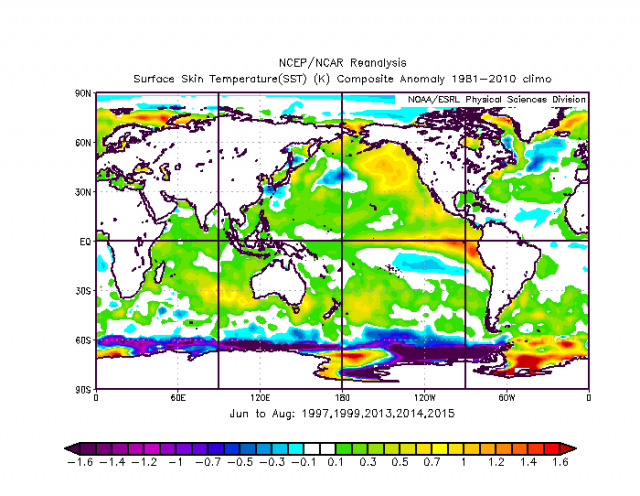 In the analogs, the El Niño is stronger farther to the east. So blending the down years with the past few years is in order.

In addition, the SST forecast is almost a direct antilog to past active years. 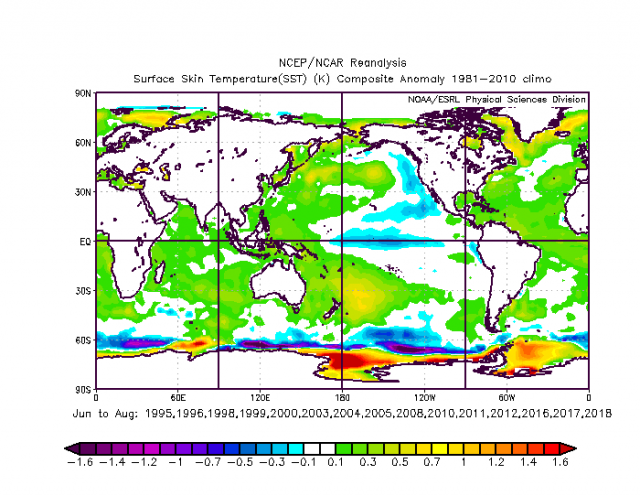 This year (right) is opposite of last year (left) in the Pacific:

Notice all the high pressure across the North into New England and in the northwestern Atlantic. Because the water is warm near the coast, it ups the ante there. The pressure pattern forecasted is not what you would look for to see a high impact season. Last year, while being too low on the ACE forecast, from this point we thought there was going to be trouble in-close. This year does not look as bullish for in-close development on the Euro, with high pressure extending over much of North America and in the Main Development region but lower pressure in the northwestern Atlantic.

This is analogous to years with less activity, especially in the Main Development Region. Like last year fast moving features at low latitudes that get torn up or head into South America seem to be something to watch for, but the pressure pattern of higher than average pressures in the Main Development Region looks like the analogs. Additionally, notice all of the low pressure in the eastern Pacific, which lines up with the low activity years:

The impact map will be issued in April. For the ACE forecast, we will start with 60-110. The worry is that we will wind up with a lower year like 2015 (the year of Joaquin was only about 63). Tom Downs warns all the time about the danger of forecasting off a forecast, but from this point of view it looks like a down year in at least the Main Development Region and less of a year farther north than last year. The caveat is that in-close systems and warm water feedback will lead to the kind of challenges that can make or break the season from an impact perspective. On the high end, if the El Niño isn't impressive we could see activity in line with last year, hence the relatively broad range.