CPC describes it this way:

The Pacific/ North American teleconnection pattern (PNA) is one of the most prominent modes of low-frequency variability in the Northern Hemisphere extratropics. The positive phase of the PNA pattern features above-average heights in the vicinity of Hawaii and over the intermountain region of North America, and below-average heights located south of the Aleutian Islands and over the southeastern United States. The PNA pattern is associated with strong fluctuations in the strength and location of the East Asian jet stream. The positive phase is associated with an enhanced East Asian jet stream and with an eastward shift in the jet exit region toward the western United States. The negative phase is associated with a westward retraction of that jet stream toward eastern Asia, blocking activity over the high latitudes of the North pacific, and a strong split-flow configuration over the central North Pacific.

That is why IN THE MEAN the temperatures look like this in winter with El Nino. 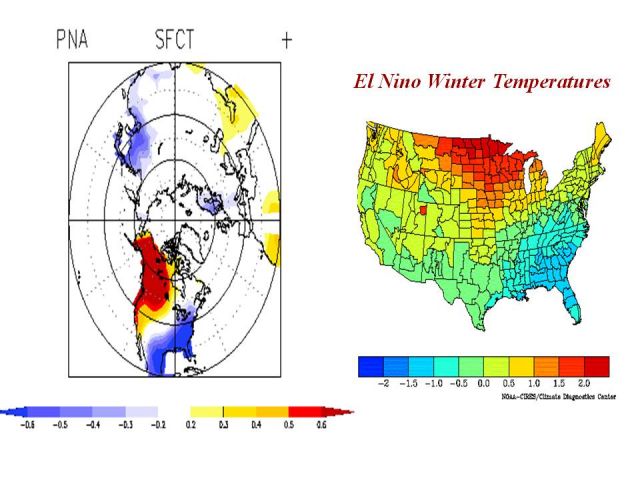 You can see the classic major eastern North America trough and western ridge that February. 5 straight months in the northeast were colder than normal.

The PNA negative is favored in La Ninas.

Some of the warmest La Nina winter had this pattern dominate. They tended as JB has written to be in cold AMO periods (like the 1970s).

The warm east and southeast though can be suppressed if the North Atlantic Oscillation is negative. A few of the coldest and snowiest winters have been with strongly negative PNA (more than -1STD). They had a negative NAO. One of the winters was 1955/56, one of our analogs. The other years since 1950 with a strongly negative PNA and negative NAO were 1968/69, 1971/72 and 1978/79. The composite 500mb for the winter looked like this.

The analog years suggest a mean negative NAO and a negative PNA.

If the NAO oscillates now that the solar activity is elevated from the minimum and the La Nina stays weaker and allows the MJO to be active, we would see more intraseasonal variability. The analogs suggest the NAO most likely negative early. More on variability this week.

The EC and GFS ensembles are showing this trend towards -PNA and -NAO. Here are a few ensemble members.