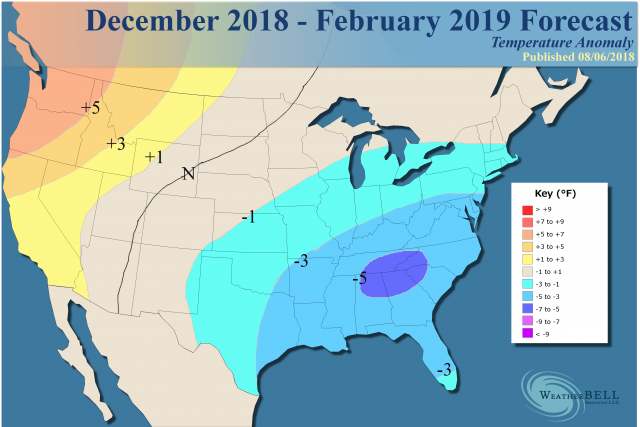 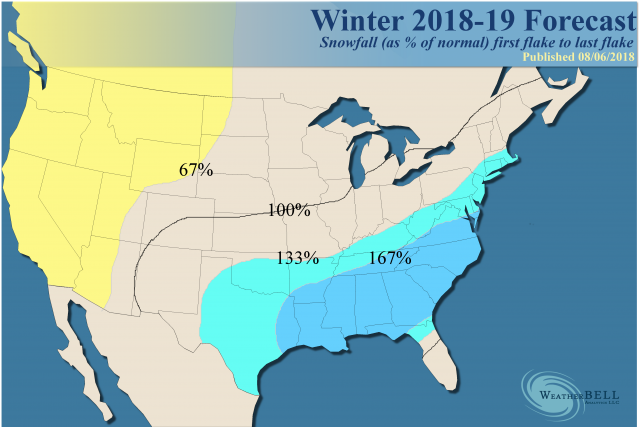 I could see freak snowfall events into South Texas and deep into Florida this year.

The analog still looks good to me: 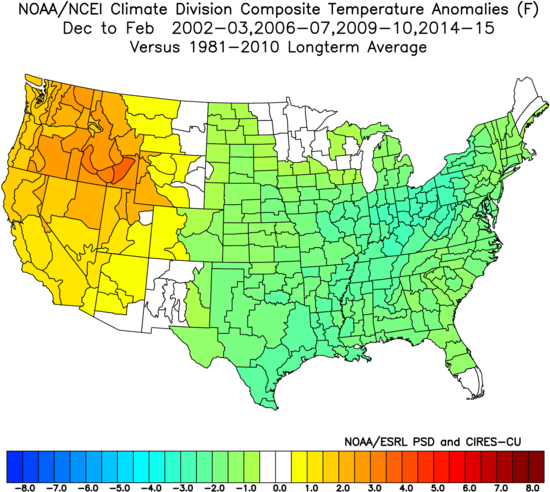 Since the spring, I have been alluding that one heck of a winter may be on the way. The question becomes how widespread and can it "run the table"? The European looks quite like the blend of 2002 and 2009, with its implications of all months having large-scale normal to below temperatures. I am getting strong objective support from models that this winter could be as bad as 2013-14 or 2014-15.

None of the Decembers in the sample were "severe". Remember all the winters in the sample had a time where winter let up, whether it was a warm start like 2006 or 2014 or with back and forth. My fear is this has a chance to be more than just a focused 30-45 day period with times where it lets up. 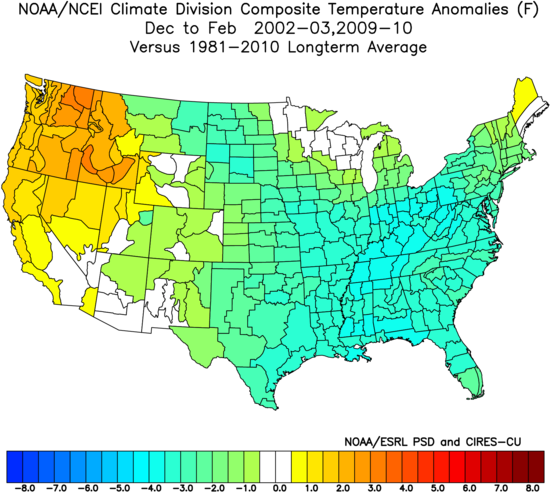 The WeatherBell Pioneer model has been great forecasting the jet stream over the last 5 winters, but the winters of 2015-16 and 2016-17, with the globe warmed from the El Niño (and we are talking about an immense amount of water vapor launched into the atmosphere) the model had trouble with the surface temperatures.

You have to understand this is a new model and it's not called "Pioneer" for nothing. Last year, as the globe cooled, it was better. The concern is it is going to flat out nail the 500 mb pattern and temperatures this winter, as the trajectory of temperatures will likely be such that it's cooler than last year. Looking at the blend of the years above implies a weak to moderate Nino3.4 in the central Pacific, which will be much more amplified than Nino1+2 in the eastern Pacific. In addition, the larger scale warm Pacific ocean ring is also correlated with the colder looking pattern eastern North America.

A look at the Pioneer model temperatures: 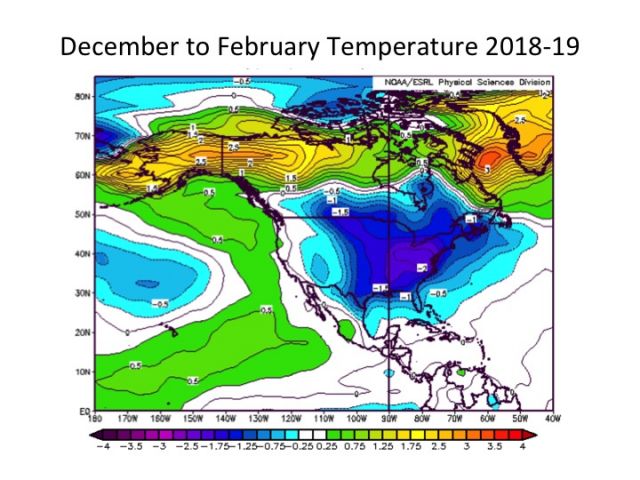 The models analogs and antilogs: 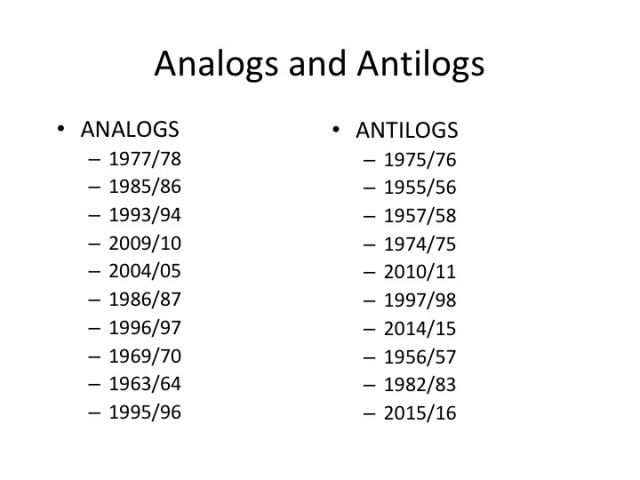 As you can see there are different years, and in fact, one year I have is an antilog (2014-15). This gives me more reason to throw out a warm December. What is fascinating is two different methods of looking at this are coming up with a similar temperature pattern.

When independent methods are coming up with the same idea, that is usually a sign the people doing it are on to something. Now the Euro has sea surface temperatures more like the colder analogs, so the colder winter analogs should do better overall than the warm ones (if the model is right). 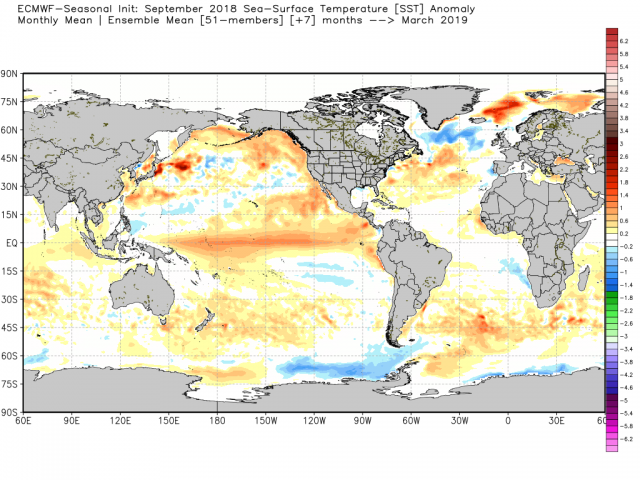 The big keys here are the warm ring in the eastern Pacific and the centering of the warmth away from the coast of South America. Plus there is an added very important wrinkle. When the Indian Ocean is cooler to the east than the west and the tropical Pacific is warmer, it tends to favor neutral or cold phase MJOs (Phases 8, 1, 2 & 3). There is less of a chance of the major warm phase MJOs (Phases 4, 5 & 6) getting as much amplitude.

You can see the model looking much like the analogs we have chosen: 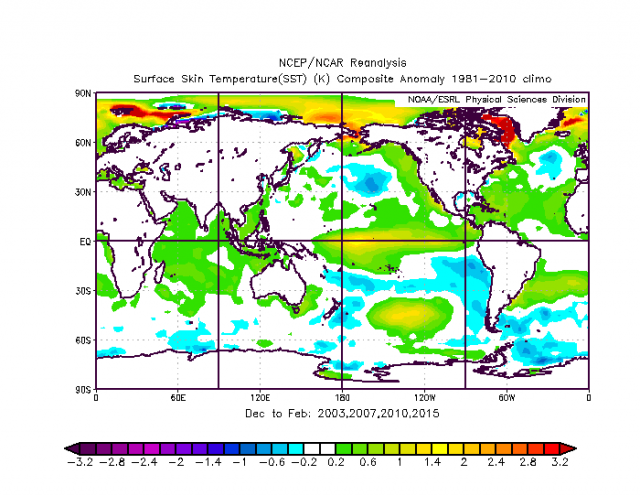 So it's no surprise when the Euro comes up with this 500 mb forecast (which has not changed): 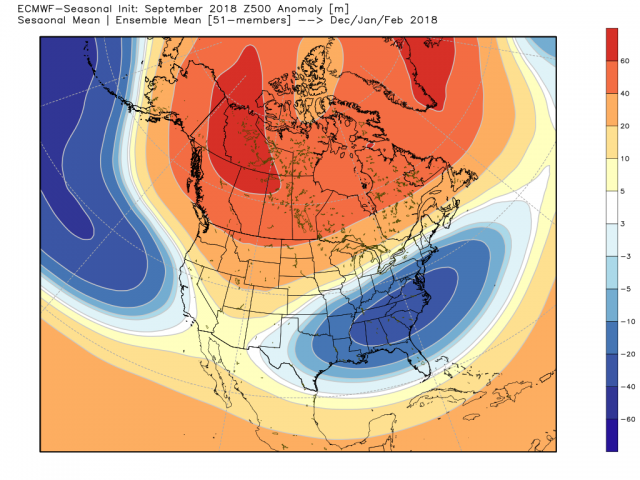 The JMA has joined it! 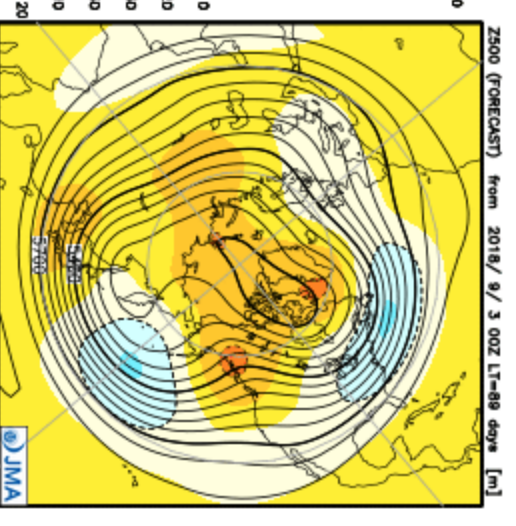 Given the nature of ensembles, which from this far out have to have outlying members that are countering this, once others fall in line, if it goes to the extreme, this won't be strong enough. 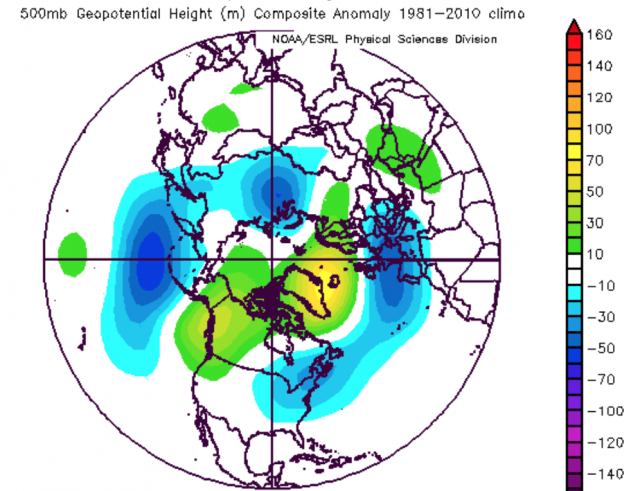 Both show troughs in the East and blocking, as does the Canadian. The CFSv2 looked like this last month: 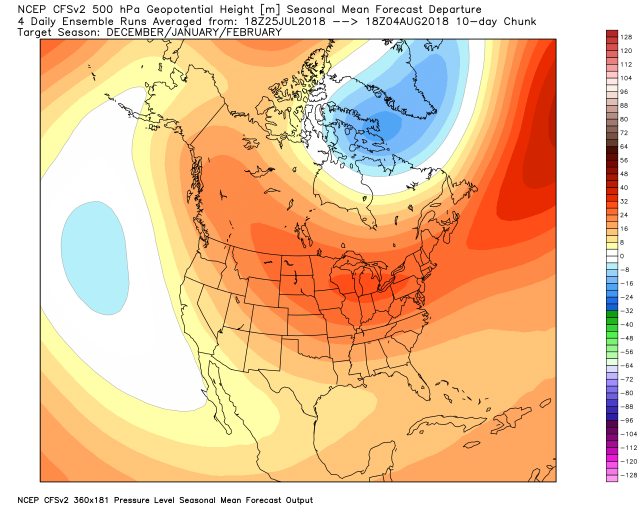 Now it looks like it's gradually pulling back toward the analogs, the JMA and the Euro (but it's still warm). 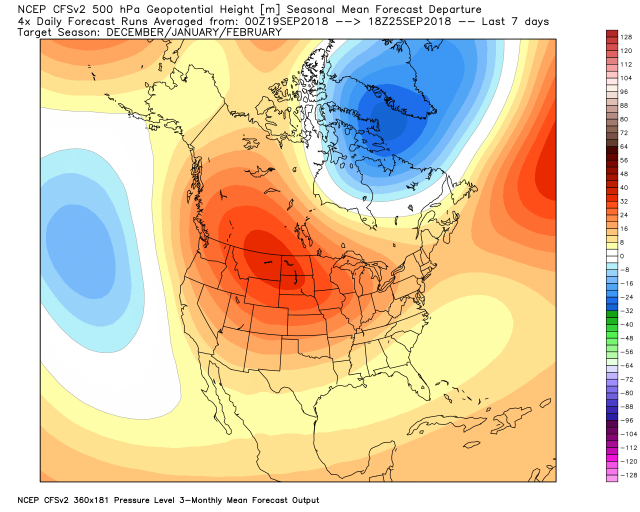 So there is still resistance to our idea. If you are looking at this, it's the opposite of what we are thinking.

The UKMET SST forecast is in line with the Euro: 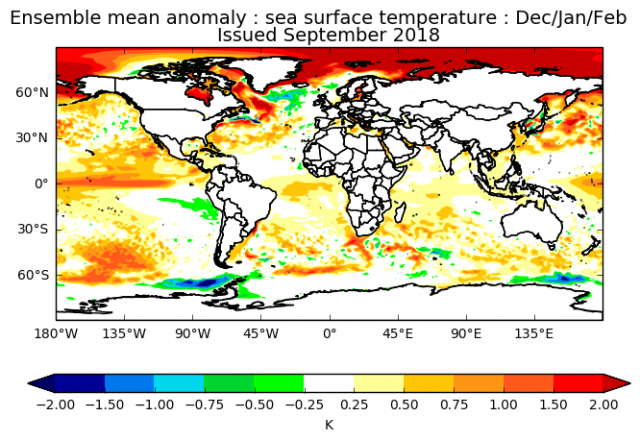 It is developing the eastern trough for the winter: 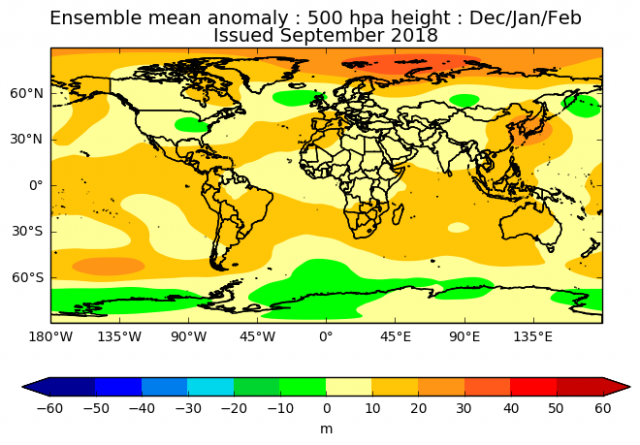 Other factors from around the globe

Look at the colder sample U.S. years, the preceding winter in South America (summer up here) looked like these: 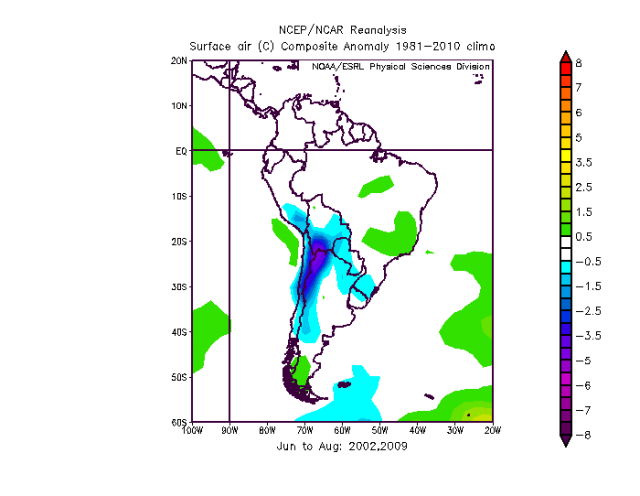 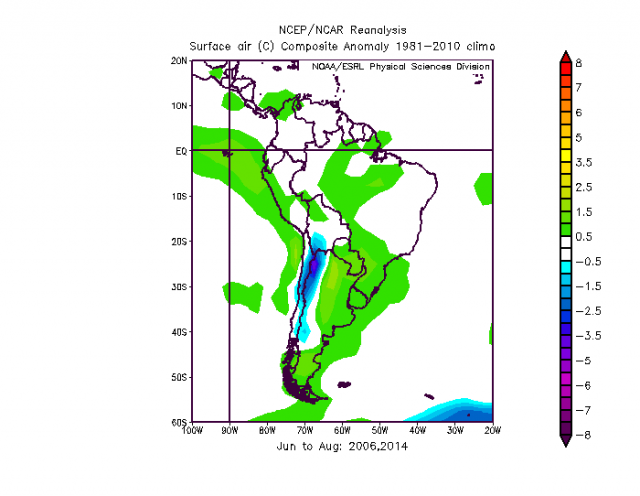 This is much closer to samples with colder weather in the following U.S. winter. My point is that I had been alluding to a warm December, but there is a good chance, given what we saw with the Canadian and now the European, that this winter will start early and stick around.

The Euro forecast for December: 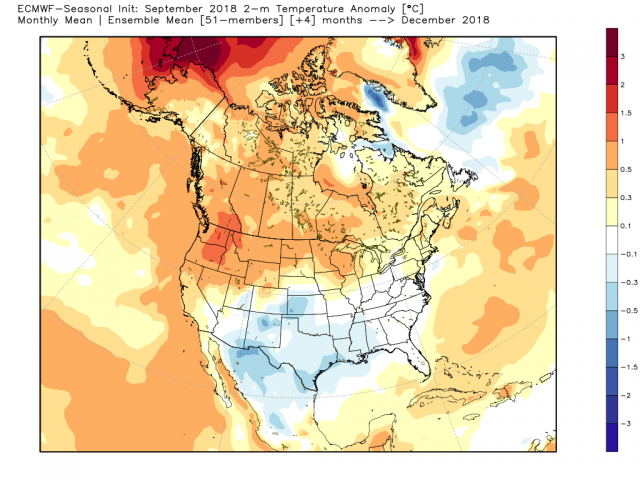 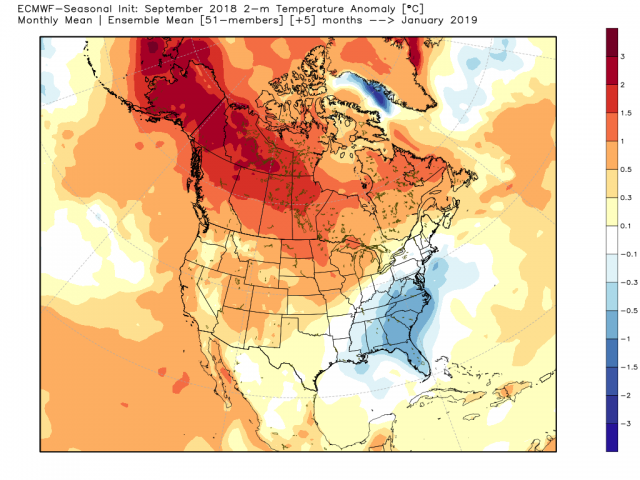 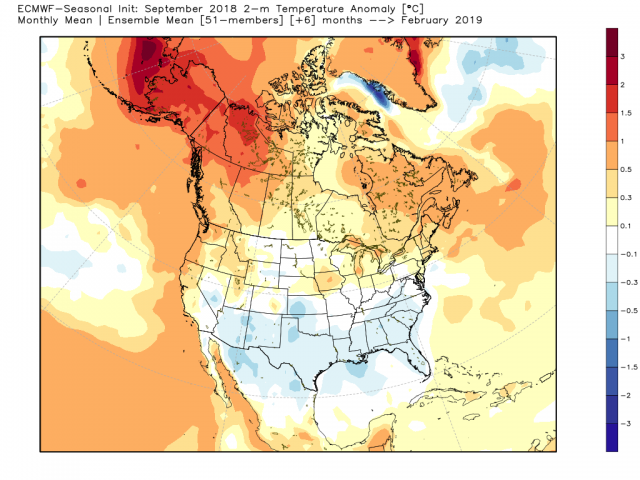 Our Pioneer model by month: 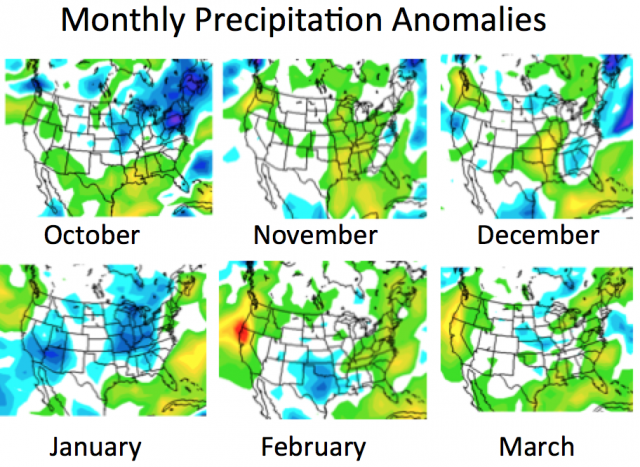 Again, the Pioneer model has done very well at 500 mb in all the winters, but in the warm winters of 2015-16 and 2016-17 it did not do well with temperatures. It did do very well in the cold winters of 2013-14 and 2014-15 along with last year. There is tendency, in this age of surrounding source region warmth, for modeling not to "see the cold" that shows up. It washes it out. The Euro, for instance, in the major cold winters the Pioneer caught, just had large areas of normal or slightly below normal, the way it does now.

There is no question that no matter what the cause, we have to deal with the current state of the planet and the changes that can occur. What I am doing now is matching up events when they are thrown at me, doing the grunt work, finding the closest examples and then trying to apply them to what we are seeing so we can make a forecast. The weather since early 2017 has been flowing from one event into another. The two most interesting aspects of the past two years have been (1) four record-setting MJO amplifications in various phases give the time of year and (2) the drop in the global SSTs from its peak three years ago: 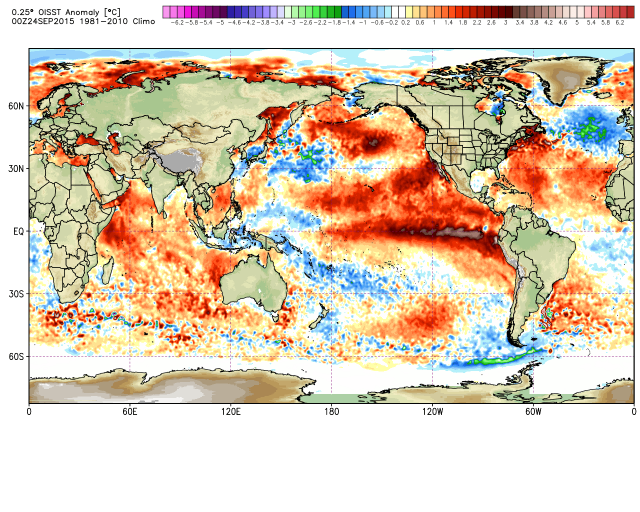 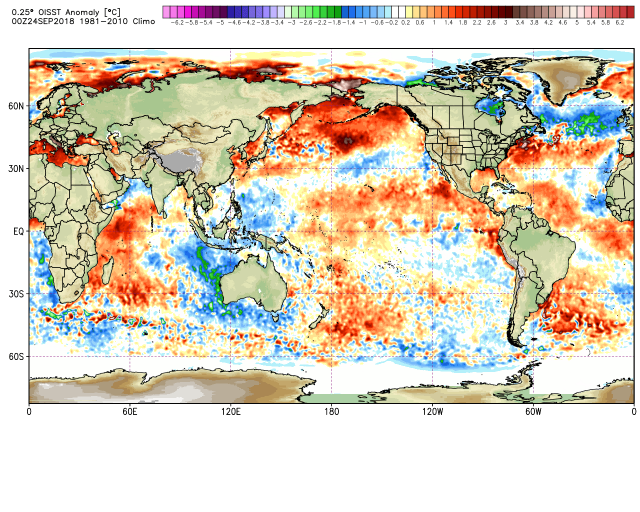 The drops in the Indian Ocean and the North Atlantic are stark. It has turned into a more gentle warm look with local hot spots. This has to have large-scale implications. 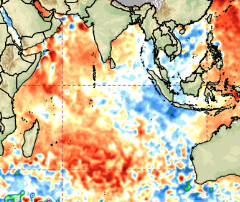 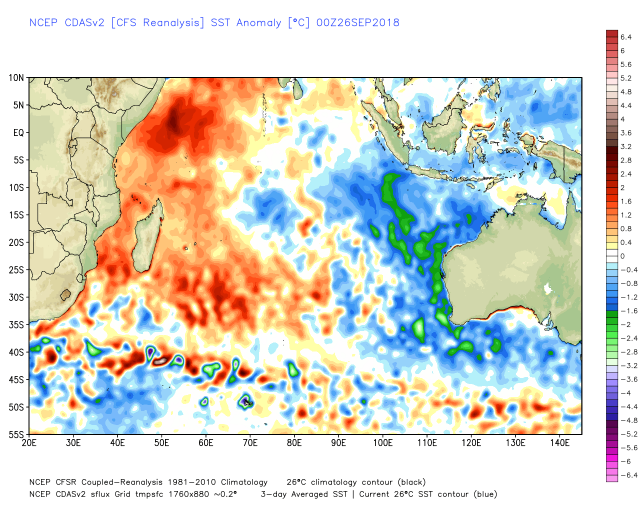 This will have big MJO implications if this hold into the winter season. In a large sense, I think it will focus stronger convection in the colder MJO phases for the U.S. For instance look at where there is the least amount of rainfall in Phases 8, 1 & 2, the coldest phases for the U.S.

Strong convection in these areas support more ridging over the U.S. (Phases 3-6). You can see that in the temperatures during December-February: 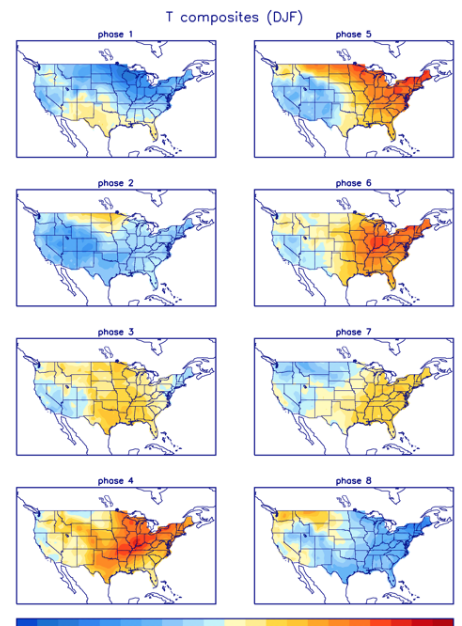 As I said it's not just the pattern but how you are getting there and from where. I do believe the changes in SSTs, water vapor, sea level pressure and the Global Wind Oscillation all matter and are all important in forecasting. We are trying to discern the meaning of where we are and where we are going.

Cold is fighting back, and where large-scale cold does show up this winter it is likely not to take prisoners. There is plenty of reason for blocking to take place, given the increase of water vapor due to the overall warmth of the oceans of the past 20 years and still trying to wash out the Super Niño (minute increases in water vapor lead to quicker saturation and condensation and release of heat, hence the blocking over the pole). Solar activity and the QBO are even more variables that should lead to increased blocking, which in the end causes longer duration cold over the mid-latitudes. Arguments over the entire cause of that is best discussed elsewhere, but I am sensitive to where we are and do think it must be dealt with. The bottom line here is I would be looking closely at the winter of 2002-03 and 2009-10 as that is where it could go, but the blended four analogs are where we are now.