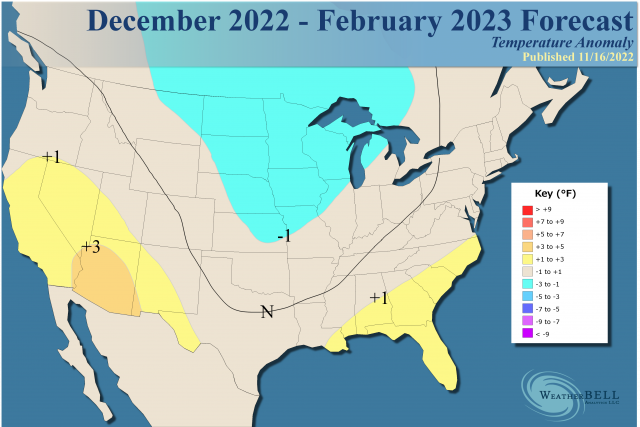 The hurricane analogs hold, but 1935 and 2009 have been added due to their November correlations. 2005 and 1989, both winters that broke, have been given triple weight. So here are the analog temperatures (warmed 1°F over the pure number): 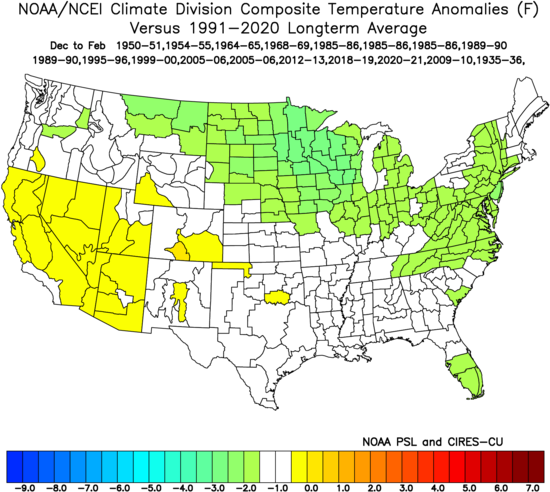 Now compare that with the CFSv2: 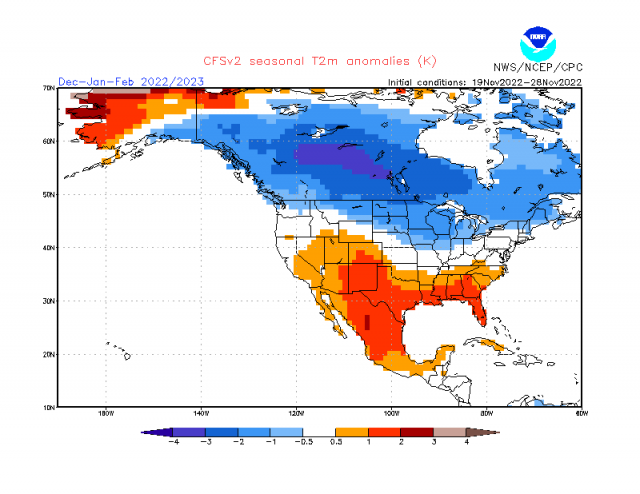 This has been flipping around as December is now the coldest month, when 3 weeks ago it was a blowtorch. 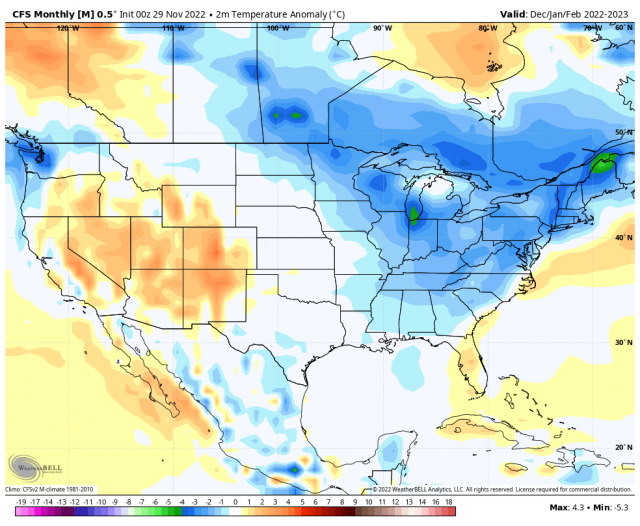 Here is the rub - the JMA has got the threat for the biggest month in December. Other models have now gone toward our idea in December, and so we move to the other details. There is a threat of a warmer January as the MJO battle between the bullish Western Hemisphere and the bearish Eastern Hemisphere will be present.

That is what you have seen so far. Phase 6, though warmer, has set up the colder outbreak in November as the MJO has been progressive. As long as it does not stay stalled in Phase 6 then the type of situation we saw in 1989-1990, 2005-2006, and other years, won't occur. I am very concerned about a major January thaw, though, and have a fear we can get stuck in Phase 6. We are seeing the western Indian Ocean warm up, which means the Phase 6 response would be weaker.

It's two dogs fighting. I made the mistake of warming up the 2010-2011 forecast. I nailed the cold start from a few months out then blew the last half as I played the warming card, as 2005-2006 was etched into me. Perhaps the midground of the two options is best. This forecast can really turn out a heck of a lot colder. It's been a long time since November/December, back-to-back, have even been normal, yet alone cold. We have not really run the table since arguably 2010-2011, so I have opted for the core of cold to be in the central U.S. Plus I figure we have been well ahead of the game here so far and that strategy was to warn you about a midwinter flip. So with that in mind, I am going to wait and see which path to take and want to emphasize the forecast is a product of trying to figure out where the core of the coldest air will head.

One thing I can't believe with all this cold air around will be the same thing that has happened in the past two winters, where a few weeks of cold air hammer Texas and try to turn the table there. The last two Februarys were model debacles there, We just had another bust for November. Actual: 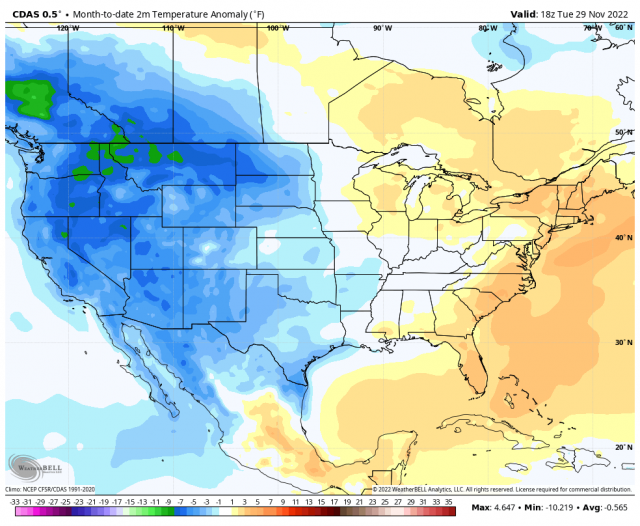 The Euro forecast from the end of October: 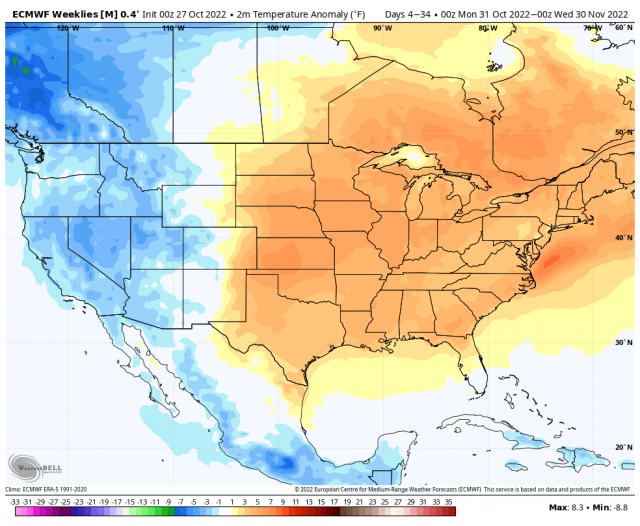 This shows the effect of competing signals from the tropical oceans. The JMA has had a major trough in the Far East the whole time, but the CFSv2 does not. So models are all over the place. The IOD is now neutral so the cold analog is not there.

Again please refer to the mid-month discussion for other colorful examples. 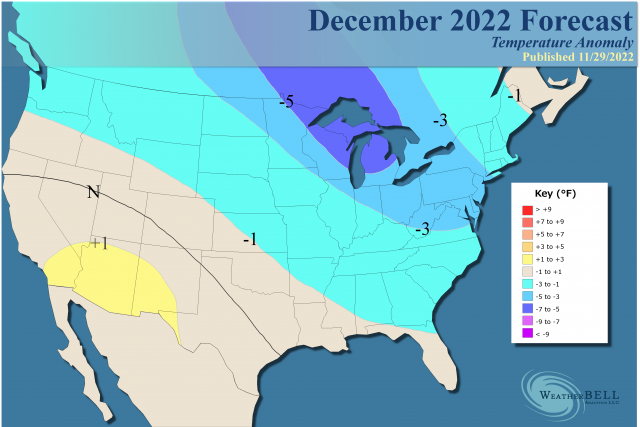 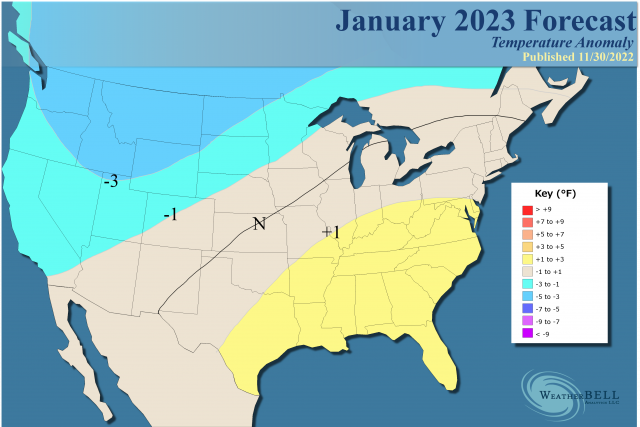 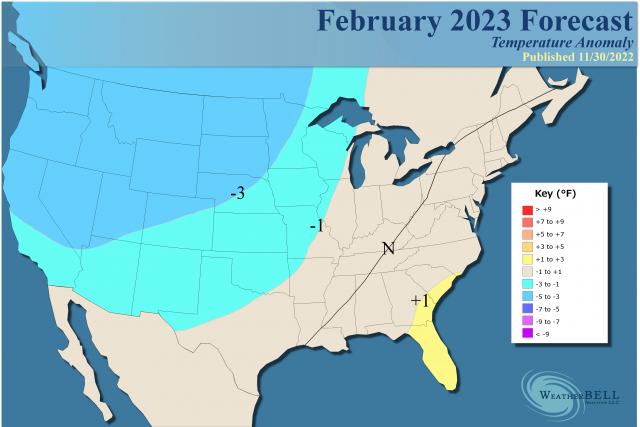 The forecast map is an average, as it is a 3-month map and doesn't indicate how we get there. My suspicion is that December is going to be quite cold in the East as the EPO goes negative again, with a negative AO to support it. I wrote that two weeks ago and it looks like it's evolving as planned. So the long-standing forecast idea looks good, but keep in mind that the same idea said there will be a real challenge figuring out mid and late-winter. If the 2010-11 analog wins out, everyone will have their work cut out for them.