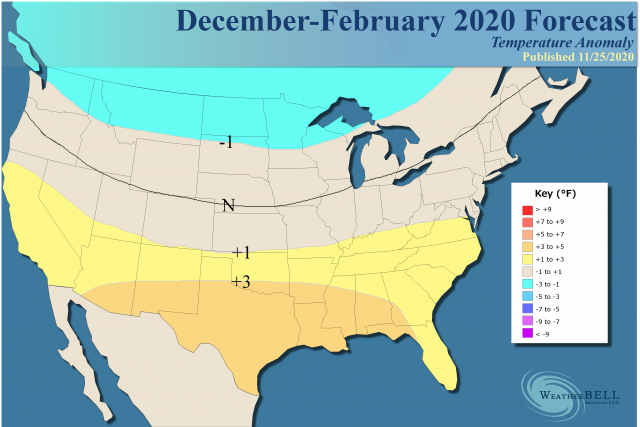 The overall forecast is close to what we had before. 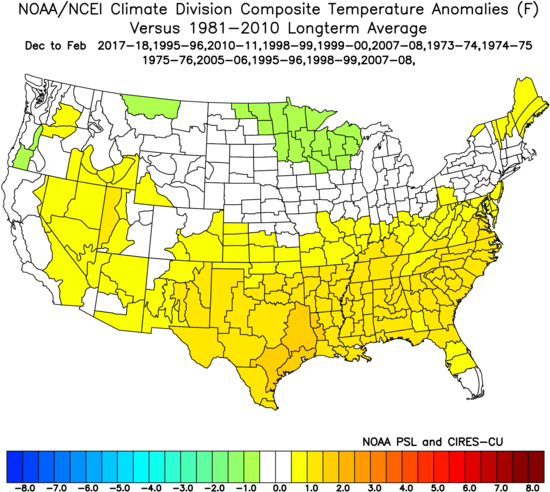 The whole theory on this relies on the MJO, when active, going into Phases 3, 4 & 5 the most. This would favor large-scale warmth. However, while planetary temperatures are above normal this simply cannot be used as an excuse not to see any cold air. Modeling has had a lot of trouble with this. Given enough members over a longer period of time, they will naturally try to cool excess warmth in northern areas and spread out the warmth all over. It's been a major problem, and we have done our best to stay ahead of it.

Quite frankly old school analogs with SSTs are 0.5°C above what they used to be and can't be weighted the way they used to be. So it gets dicey with that, but what I did in the analog package is to migrate them toward La Niña seasons, with the previous hurricane season incorporated in because of my belief that the Atlantic does actually have something to do with North American weather. If anything, you are seeing a demonstration of that with December, the late active hurricane season, and a colder December upon us (at least colder than modeling).

The area of above normal snowfall was expanded to the south to allow for the threat of a couple of events during the first few weeks of December farther to the south where normals are low to begin with. Even if the pattern overall is warm for the heart of the winter, enough cold can try to get into the pattern to force snow events to the southeast of the main area of concern. 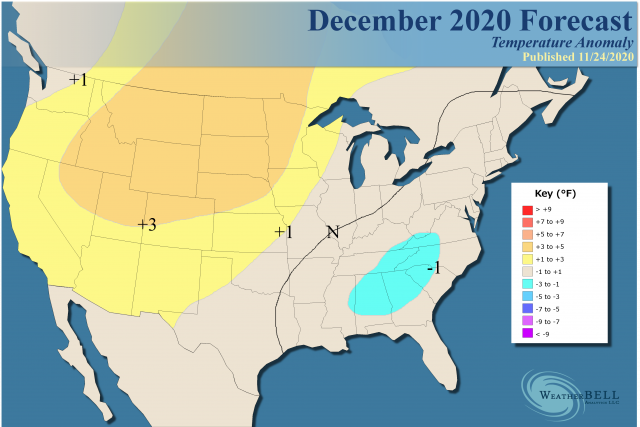 I am worried the cold will be more expansive, but it's a race between the length and strength of the first 10-20 days and the anticipated warm flip later in the month that would then take over for January. So the analogs look a bit colder and do reflect the worry, though it's back through Texas that we really have to look out. 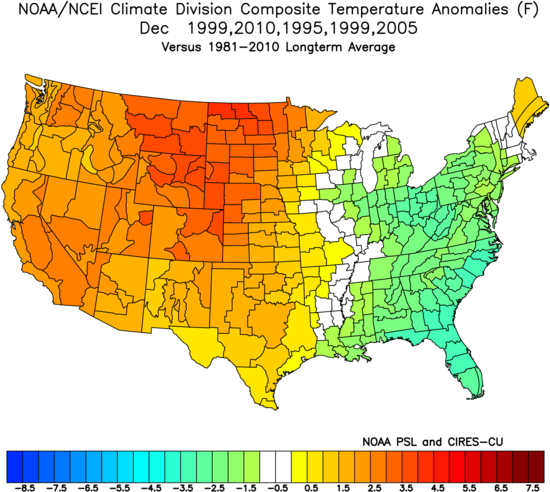 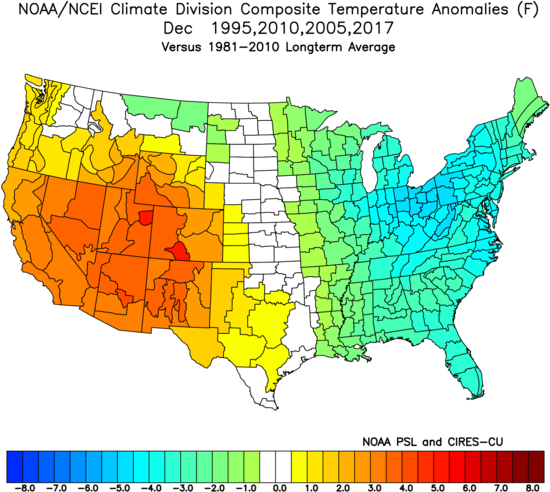 The modeling is still predicting a warmer December than the 9-year running means, which have been very warm:

This is the CFSv2 10 day period of runs ending November 22. These are the last nine Decembers: 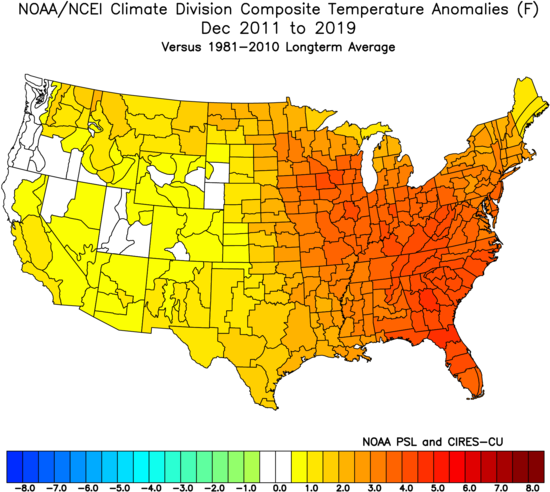 So the December forecast we have for you has been bold in the face of this. It has been further honed with colder than average temperatures from southeastern Texas to the Northeast. The worry is it is not cold enough. That being said, to be fair recent CFSv2 runs (over the last couple of days) have turned: 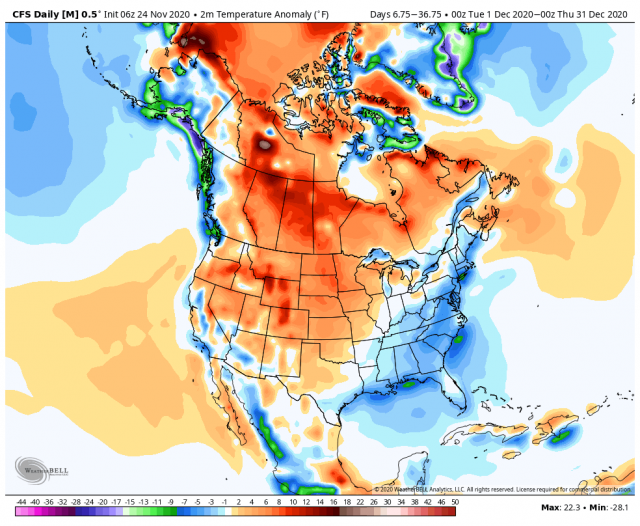 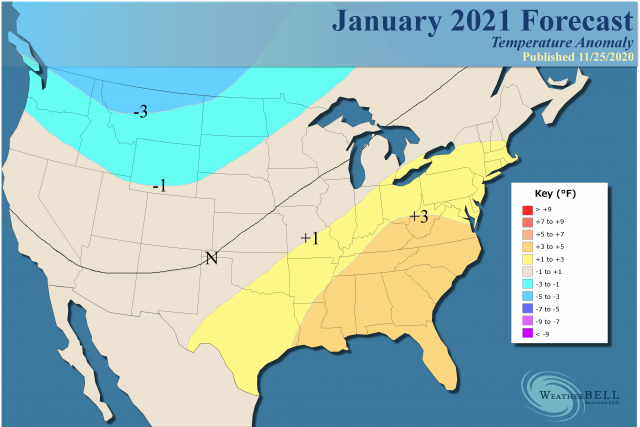 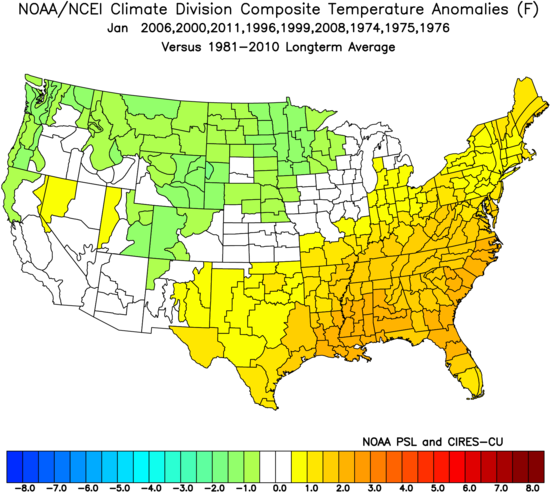 Compared to last month, we have cooled the cooler areas and warmed the warmer areas. I believe the modeling showing the warm pool in the northeastern Pacific pulling back and the warmth in the Indio-Pacific area. That would be conducive to the warm phases of the MJO (in the East).

However, this won't be all sunshine and rainbows. The air coming into western North America will be extremely cold. Since global temperatures are above average, it simply means warmth will outduel cold by whatever value. Obviously, there has to be some cold air around and it can be nasty. It looks like a bad winter for Canada that will be late to end, as a pattern like this in January typically promotes plenty of snow from the Rockies to the St. Lawrence Valley. 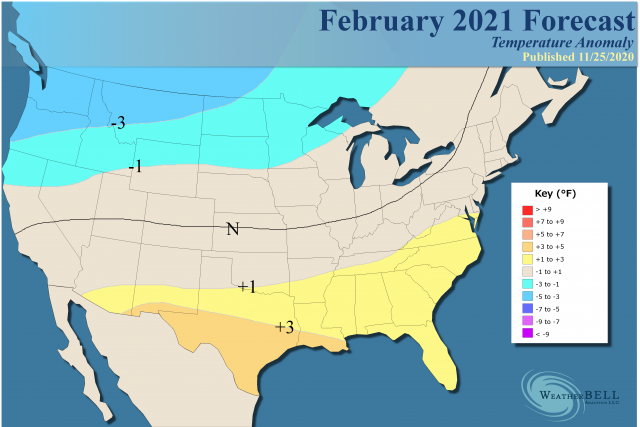 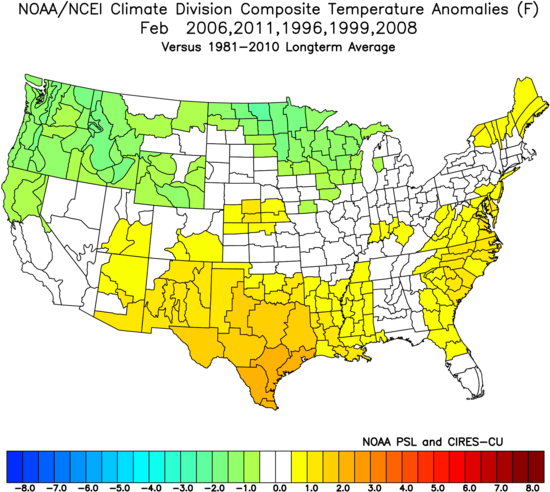 We are playing it close to the vest overall for February. Usually in the latter parts of winters like this, cold, because of the massive build-up of snowcover in Canada and the seasonal reaction of the jet as it starts to weaken, can bring a change in February and March. There are some cold Februarys on the table, and another flip or semi-flip to a colder look may get underway. I have no idea if it will be early or late (or if it really will occur) but it appears there is model support for this idea.

The big factors are the La Niña, the antics of the MJO, and the teleconnections. The MJO is from a source region that will push the other teleconnections around. At times it will be neutral, and the cold air that will be in Canada in January and February can sometimes push. With the warm water in the northeastern Pacific expected to pull back, it would favor a broad ridge centered back to the west and not a sharp one near the West Coast. That being said it would create a jet stream of Siberian/Arctic origin, not just a Pacific firehose we associate with warmer winters. If that can come into North America and spread out more across the North (remember the U.S. is closer to the equator than the North Pole), it can penetrate into the Midwest while a Southeast ridge will fight it tooth and nail.

So the December cold period looks for real, but I think the idea of a warmer heart of winter looks real good.