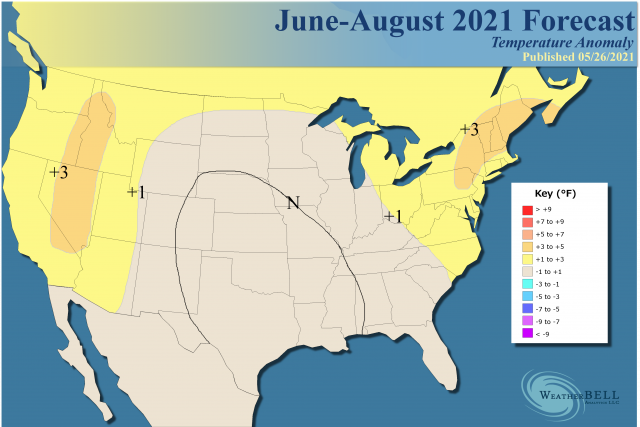 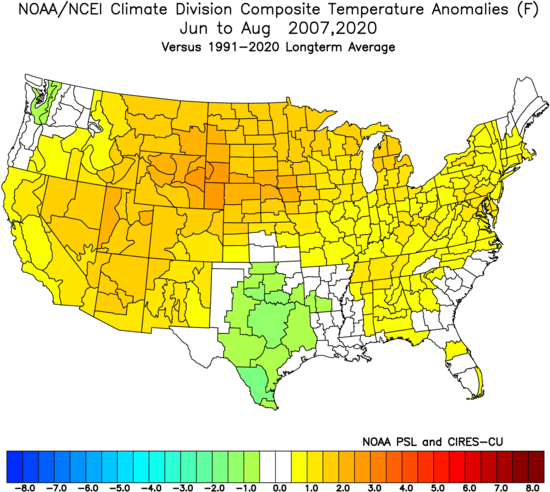 The key with the MJO is the amplitude at this time of year. It does like to journey into the notoriously colder phases. My take on the hurricane season is that it's telling us that we see warmer areas farther to the north with more MJO amplitude and if you get that over the northwestern Atlantic you would be directing hurricanes into the U.S.

During the last 8 years, you can see where the skewing of warmth during the day is (over the West), with cooler maxes in the Mississippi Valley: 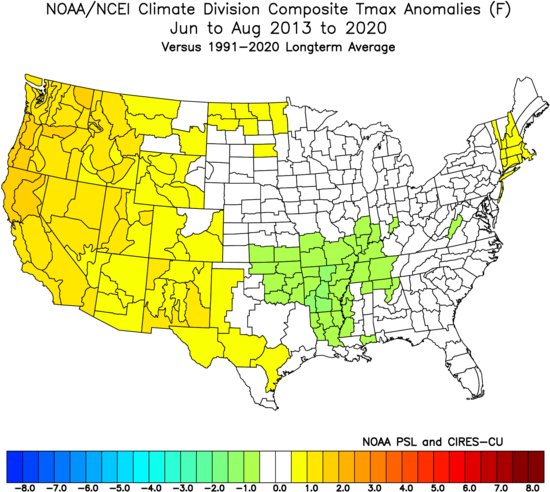 Where it's drier it's going to be warmer but increased water vapor without the needed warming aloft means more rainfall, which limits summer high temperatures. Precipitation during that time: 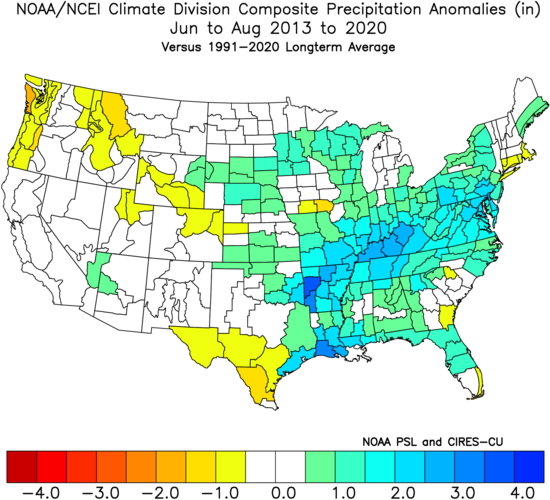 So you can see why summer precipitation is so important. So far this spring, the location of the cooler air is a bit farther to the west due to the area of heavy rains, but there may be a migration eastward with time.

The cool air in Texas and the southern Plains continues to stand out. 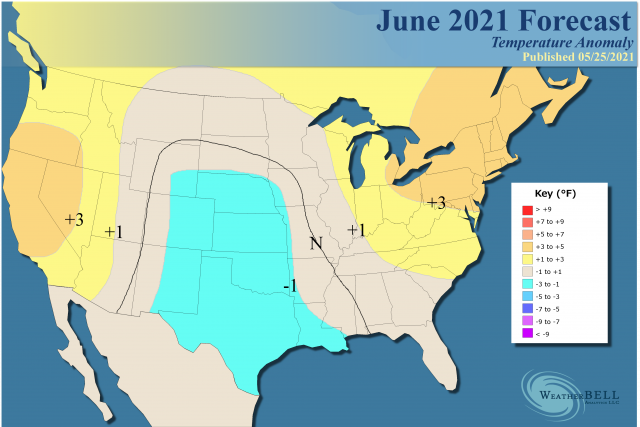 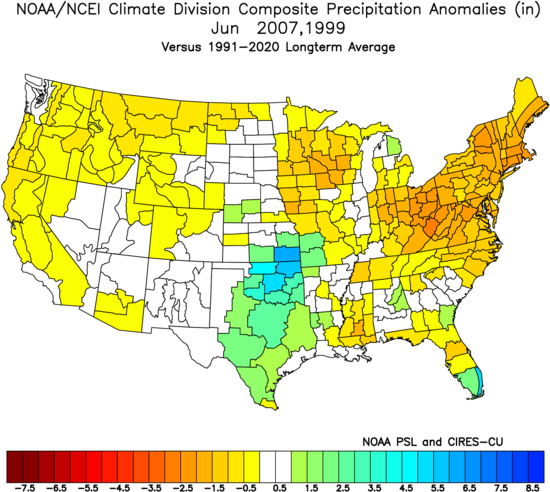 The June forecast is heading toward the idea that the ridging we saw pop over the Great Lakes and Northeast for a time in May will start repeating itself. With normals still low, the chance for a week that can be quite hot versus those normals can skew the monthly temperature forecast a bit. Meanwhile, the heavy rain over the Plains is not going to be in any hurry to let go of its grip. 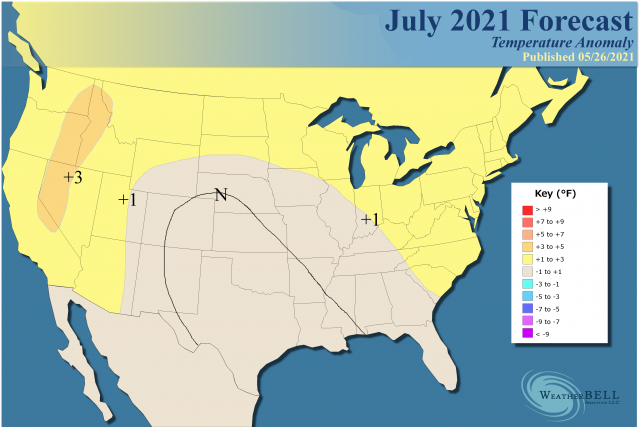 For July, the +3 area has been done away with across the Northeast because normal daytime temperatures are higher than June and SSTs are not as warm as they will be later on in the summer. In July it's really hard to get it to +3 because there isn't as much temperature variability. Meanwhile, in the West where it's dry, incoming solar radiation can lead to higher temperatures. 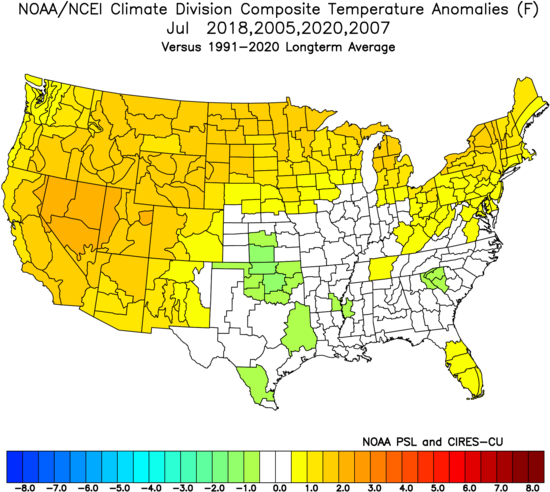 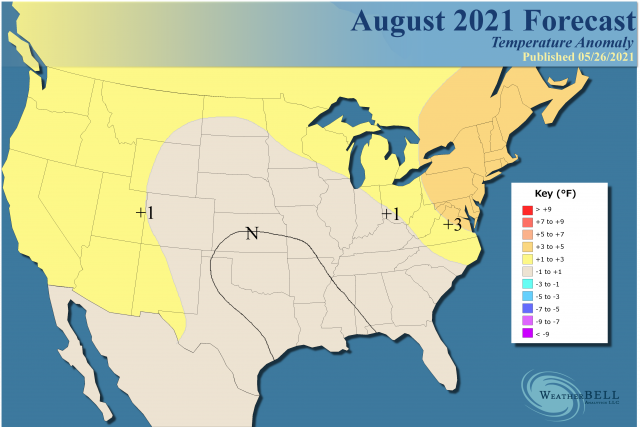 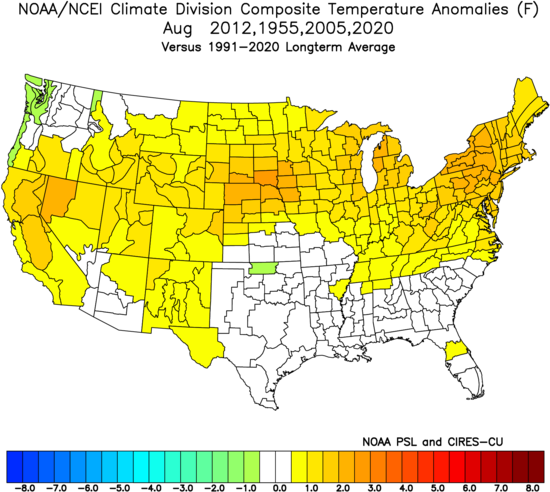 The +3 is back in the Northeast in August because of high nighttime low temperatures and a couple of good old-fashioned heat waves can do the trick. I am concerned about more southern cool but farther to the east than we've seen so far. Notice how the CFSv2 warms West Texas more.

It is interesting it is cooling the West like that but then again as the sun starts sinking in the sky some of the dry ground feedback may be leaving.

The first impression of summer back in March has been changed quite a bit as the forecast got honed. We once again had a hyper MJO spring in cooler phases, unlike 2011 or 2012 which I was first trying to model it after. That being said, the biggest area for positive CDD departures looks to be from the Great Lakes to the Mid-Atlantic and northeastward.

The early summer will be hot in the West and then back down. The corridor of cool air that will be aimed into Texas early may get aimed farther to the east later, and an active hurricane season, as far as impacts, is being forecasted, which would go along with the temperature and rainfall forecasts. The corridor of cooler air will shift to the east by the fall, and that will be discussed in the 180-Day forecast tomorrow.