What Effect Will the Solar Eclipse of August 21, 2017 Have on Temperatures?

The upcoming solar eclipse is special since all parts of the Lower 48 states will experience at least some dimming along with a coast-to-coast total eclipse trajectory. However, according to NASA, a location needs at least 90 percent coverage to notice any darkening at all. Even 99 percent coverage of the sun only provides the same level of darkness you'd typically see at twilight. Outside of that narrow band, it may be akin to a cloud passing by the sun on a sunny day. 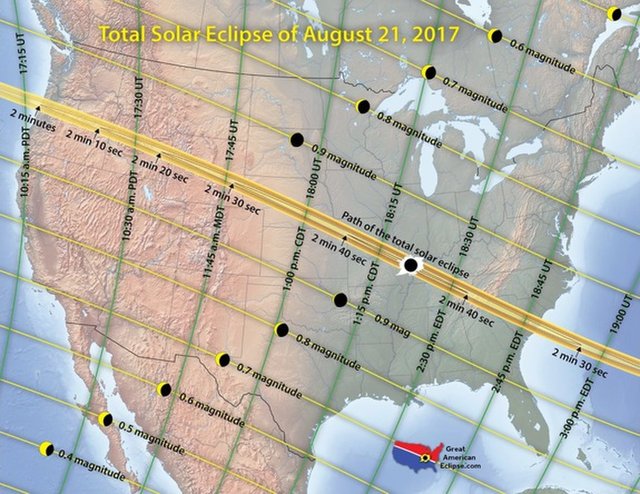 Will the blockage of the sun affect the weather? For most areas, the answer is yes, but to varying degrees. There are many factors to consider, some of which are:

On August 21, the greatest potential effects would be close to the path of totality and in a one to two hour window. The localized weather conditions along the route will dictate how much of an impact the eclipse will have.

The driest, sunniest situations would allow for the greatest impacts. If the weather is cloudy with precipitation and the moisture content of the atmosphere (humidity) is high, little observed changes would occur. Those conditions usually minimize temperature changes on any day, regardless of an eclipse. With very dry air in clear skies during the summer, the largest variation in temperature typically occur on any given day, producing rapid cooling late in the day into the night and an equally rapid warming after sunrise.

In winter at higher latitudes, if the moisture content of the atmosphere is very low, winds are light and skies clear, the changes can be great. According to research done by astronomer Jay Pasachoff from Williams College, during a total solar eclipse on the Norwegian island of Svalbard in March 2015, temperatures dropped from 8 °F to -7°F.

In the tropics, in higher elevations during the dry season, a similar large change can occur. The moon's shadow swept by Lusaka, Zambia, on June 21, 2001. The air temperature dropped over 10°F. This graph shows a series of measurements made by NASA astronomer Mitzi Adams during the total solar eclipse using a Thermochron Temperature Logger.

Lusaka is in the southern part of the central plateau in Zambia at an elevation of 4,196 feet. June is the coolest, driest and sunniest month with dewpoints below 50°F. These are conditions, like in Svalbard in March, that favor more significant changes.

For the upcoming eclipse, locations that lie along or near the totality path across the Great Basin, Rocky Mountains and High Plains are more likely to witness the greatest dip in temperatures because they are typically sunnier and drier this time of year. States like Tennessee and South Carolina, which tend to be humid, are more likely to see cloudiness and even showers. Changes here will likely be less.

Where winds are light, the differential cooling can induce pressure changes enough to cause what is called the “eclipse wind”, a light but noticeable breeze blowing from the area of totality where the cooling was greatest. This is akin to a sea breeze or even winds that blow out of cooling thunderstorms. When the day is breezy, the winds would lighten as they often due in the evening as the sunshine diminishes.

Research done years ago at Penn State showed the impact of sudden reduction of radiation on the tops of thunderstorms or building cumulus clouds. A rapid cooling, albeit brief, might enhance a thunderstorm updraft in a short window before the surface also cools. The timing of this year’s eclipse makes it less likely that localized “air mass” thunderstorms would form, as cloud formation usually peaks in the mid afternoon.

All next week WeatherBELL will be doing updates on the weather's potential impacts on eclipse viewings, including detailed updates on the wildfires in the West. Please follow us on Twitter and Facebook for the latest.