Temperatures for the core of the winter: 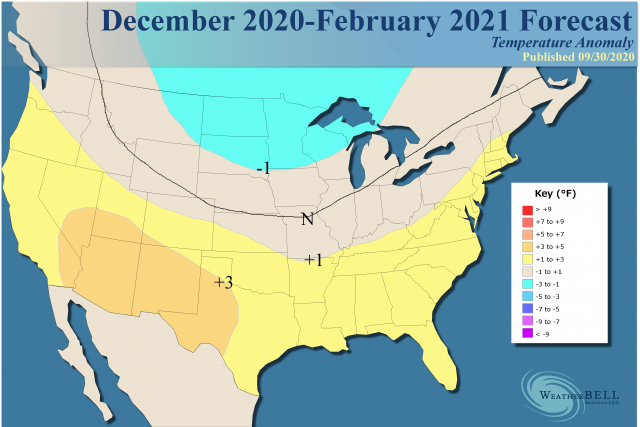 Right off the bat, this is quite a change from the initial offering. The reasons will be talked about below. 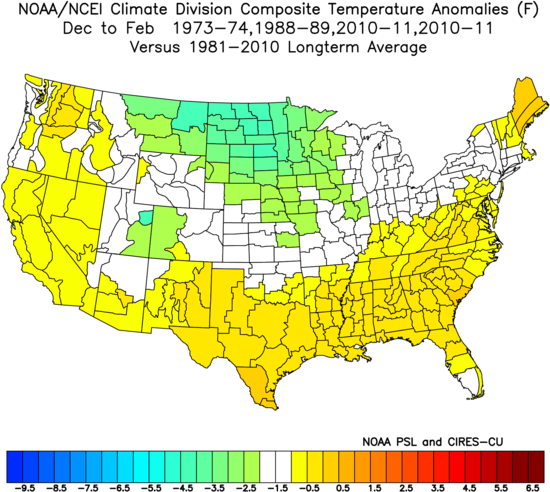 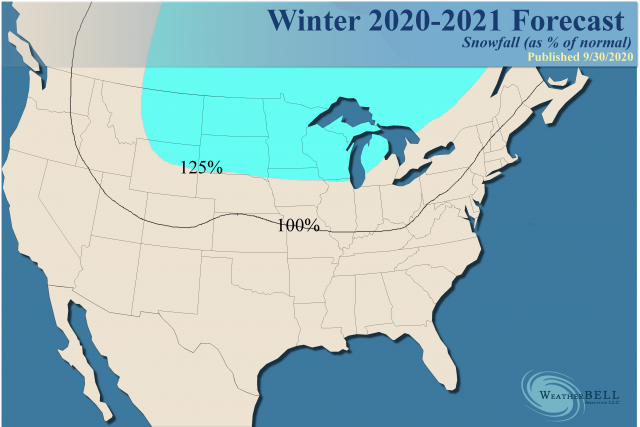 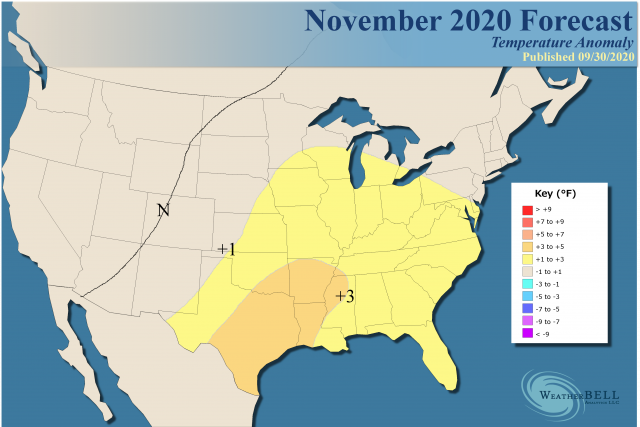 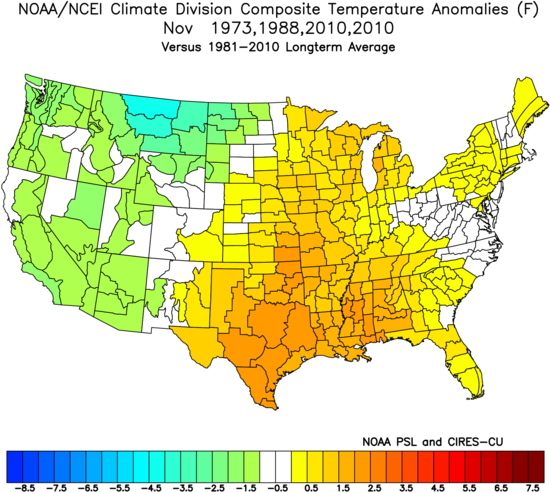 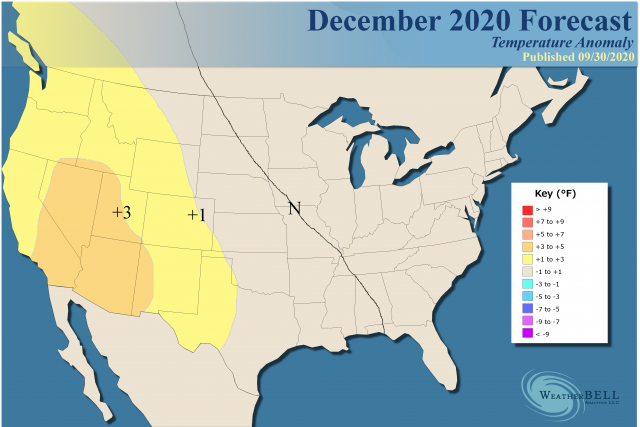 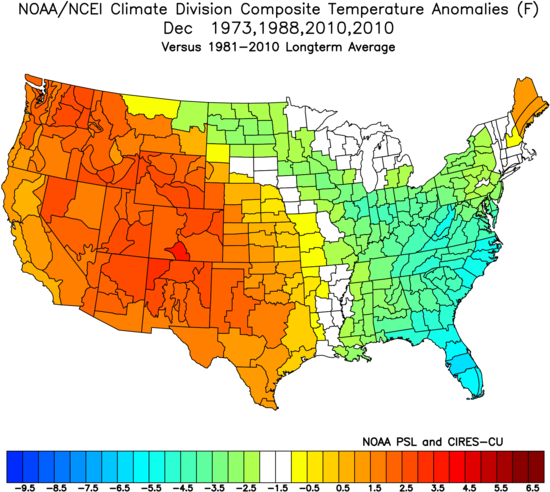 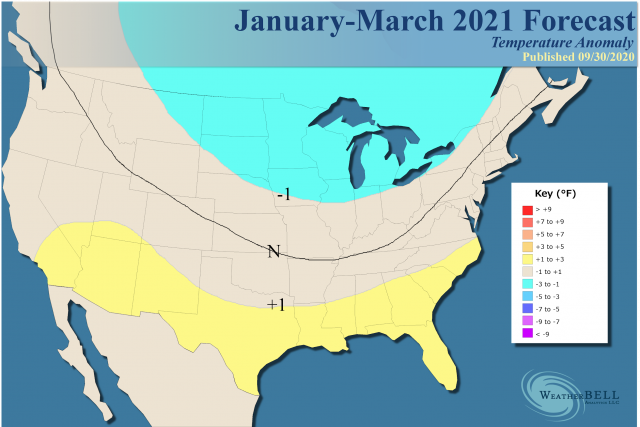 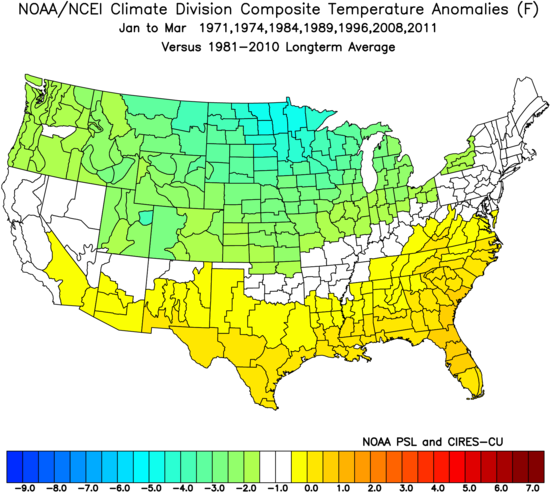 The whole package together gives us this: 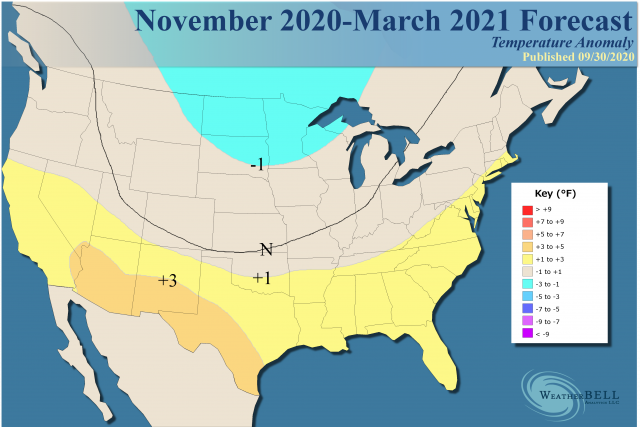 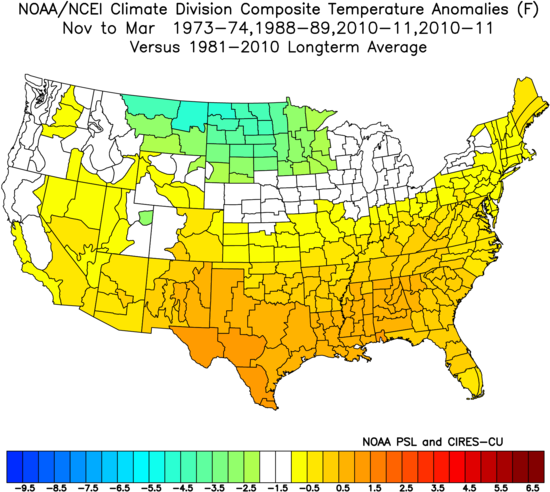 Some of these analogs were so cold overall that they were adjusted upward. In the case of December, it was adjusted by 1.5°F, so there are some heavy-hitting cold analogs on the table. First-year La Niñas tend to have some big cold outbreaks, the most recent one that was centered in the East was 2010.

I have trimmed down the analog package and made some changes. Let me again remind you that as more information comes in the analogs will change. There are some other ones following along, 2017-18, 1995-96, and 1983-84 to name a few, that would make it even colder-looking. As it is, we adjusted all our longer-term temperatures trying to incorporate the effect of the warmth of the oceans and the last 5 years or so.

Here is the problem - the average temperature is merely where one sign outduels the other. The planet is not burning up at 0.3°C above the 30-year running mean. What that means is that using the scale we do the entire atmosphere is that much above the average. However, where it gets cold, it can get darn cold, even as the cold as we have seen in colder times. It's just that it's not typically going to be as widespread and on a planetary scale since it can't outduel the warmth.

So the idea behind all these temperature analogs is to show you where cold or warm air will outduel the opposite sign, but respecting that if either of the regimes lock-in, it will make it more extreme. The key to the forecast is for there to be enough transience to balance things out, and fall is usually the season for transience. La Niñas also tend to produce transience. The real danger is later on as we lock into winter.

Weak solar activity in westerly QBOs with a La Niña look a lot like the JMA. I understand the idea behind the QBO, but my personal opinion is the SSTs are so warm that will override any solar input, enough where I can't make heads or tails out of it. So I am relaying Joe D'Aleo's ideas on this. Solar input in this day and age of distorted global temperatures is above my pay grade, though I was always fascinated with it.

Of late the JMA and the CFSv2 have been showing more cold air. The Pioneer model is also. I simply don't trust the Euro except to say its November forecast is likely to lock-in. Before that, it's incapable of seeing cold air if it's coming. Those three models are dumbed-down versions of some of the extremely cold La Niña winters.

The MJO is now starting to change from the last few months. However, while I think there will be a tendency for Phases 3,4, and 5 to show up this winter, it may be weak and over-run by other considerations. Last winter I knew it would have amplitude and busted on when the flip would occur. This year I think there will be less amplitude, even though the dominant phases (when not in the null phase) are warmer correlations. If it gets "stuck " in one of the warm or cold phases, it could blow a month (or season) out of the water.

The prime analog package is made up of first-year La Niñas, but the North Pacific has no apparent cool water anywhere, so it is a wild card. Since the Super El Niño, the SSTs globally have been warmer than any other 5-year period on record. La Niñas of the past had cold water in other areas of the world. The last La Nina in 2017-18 did not really have much cold water elsewhere. Neither does this one, even though a stronger La Niña (moderate) is on the way. The fact is there is a whole lot of warm water still left around.

Here is an example, the JMA SST forecast: 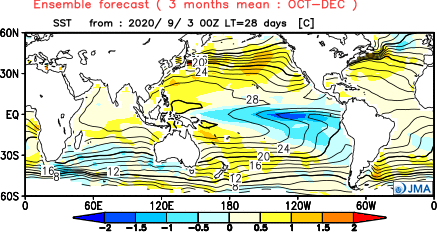 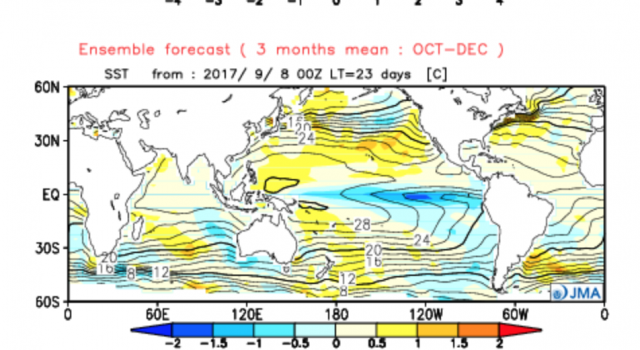 So trying to eyeball this and think about changes in oceanic/atmospheric exchanges is only something I can try to guess at. Of course, models should be much better, but one has to wonder about their capabilities, feedbacks, and biases.

We are getting into the crucial time of year. A dominating negative AO in the fall (it has been negative since mid-summer) is a bullish sign for the winter AO to also be negative. We will see how October plays out.

This is kind of a high-risk forecast. I think there is going to be a lot of cold air on the playing field in Canada. In addition. if a block can pop or the MJO goes into a colder phase, it can turn December into one to remember. If like some of the winter analogs the cold pops in the middle, it could be 3-5 weeks of Katie-bar-the-door cold.

Right now I have enough variance and reliance on warmth through November coming out to temper that a bit, as the October analog is warm in much of the nation. Though thwarted in the East, it does largely show up centered in the Plains in the next 2-4 weeks. So confidence in the final outcome is fairly high, but the way we get there will be a bumpy road. I am more concerned about a colder, rather than a warmer look, in the longer term.